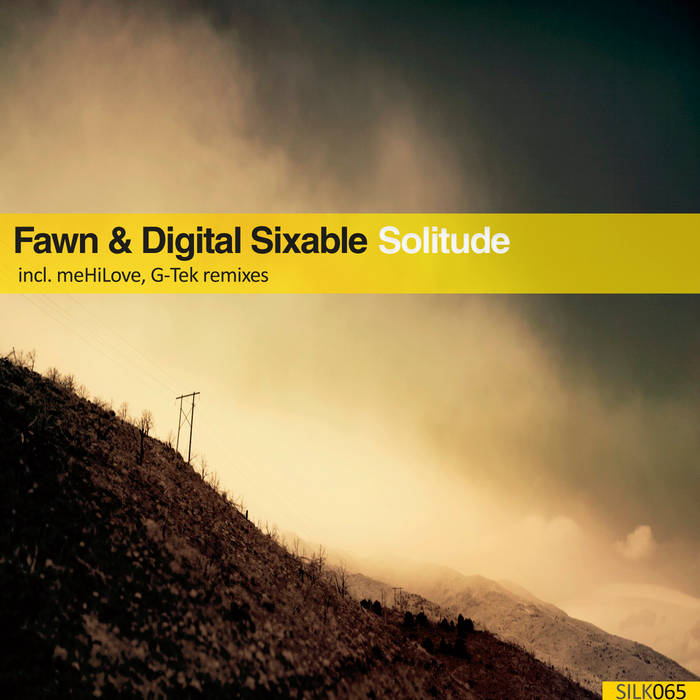 Rising American artist Digital Sixable has not-so-quietly been making waves this past year, with standout remixes of Shingo Nakamura's "Hakodate" and Luiz B's "Hidden Beauty." We're thrilled to present his first original single on Silk Digital, a stunning collaborative project with top 10 Billboard vocalist and songwriter Fawn. The release also comes equipped with remixes by two heavyweight remixers: meHiLove and G-Tek, both of whom have contributed to Silk on various occasions in the past.

The Original Mix of "Solitude" is a poetic and poignant dance "ballad," which magically combines the synthetic elements of deep and progressive house with the acoustic sounds of jazz and classical, lyrics-driven songwriting. A soothing, after-hours deep house beat and a few moody pads set the stage for Fawn's smoky, "noir" opening verse. Her voice is beautifully pitched, but also has a playful indifference, which works brilliantly with the chilled and contemplative vibe of the instrumentation. After the opening verse, the titular "in your solitude" refrain arrives -- it's an infectious hook that will remain with the listener long after the song ends. The main break features "echoes" of these lyrics, as well as an absolutely breathtaking piano instrumental. Both lead into an elegant "drop," in which Digital Sixable's various piano hooks and atmospheric effects dance along with Fawn's memorable lyrics.

On remix detail, we are excited to welcome Ukrainian sensation MeHiLove to Silk Digital; he has appeared on other Silk divisions under this name (his main alias), as well as his real name, Yuriy Mikhailov, but never before on our parent label. With a discography that boasts various tracks on Armada and Perfecto, as well as radio support by Armin van Buuren, Above & Beyond, and many more, MehiLove has already amassed an impressive litany of career accolades. He offers both a vocal and dub rendering here, both of which, as to be expected, provide a more uplifting, progressive vibe to the tune. Each features a gorgeous side-chained pad, which infuses the track with an overflowing radiance. Meanwhile, in the vocal version, Fawn's vocal is processed with a lush reverb and delay. Also throughout each, MeHiLove has written mellifluous new piano lines, which greatly enhance the emotional resonance.

Finally, we are thrilled to once again feature Panamanian star G-Tek, who has worked with Silk Digital since our imprint's earliest days. With numerous classic originals and remixes in his storied career, which has included radio support from Paul Oakenfold, Myon & Shane 54, Solarstone, Marcus Schossow, and many others, G-Tek has remained one of our most reliable contributors for elegant peak-hour progressive. His remix here explodes out of the gate with a punchy kick/snare combo and an absolutely rapturous chord progression, which sits atop a funky, head-bopping groove. Vocal and Dub Mix fans will be able to "pick their poison," as G-Tek offers both options in this package. In the vocal mix, Fawn's voice has never sounded better: each beautiful phrase glides along with the beat and is given ample space to "breathe," in the context of the overall mix. In the "Instrumental Mix," full lyrics are replaced with futuristic, trance-influenced vox stab sequences. Yet, it's worth reiterating that the highlight of this interpretation is the regular appearance of truly euphoric chords, which are nearly guaranteed to brighten the listener's mood and elicit a strong dancefloor reaction.